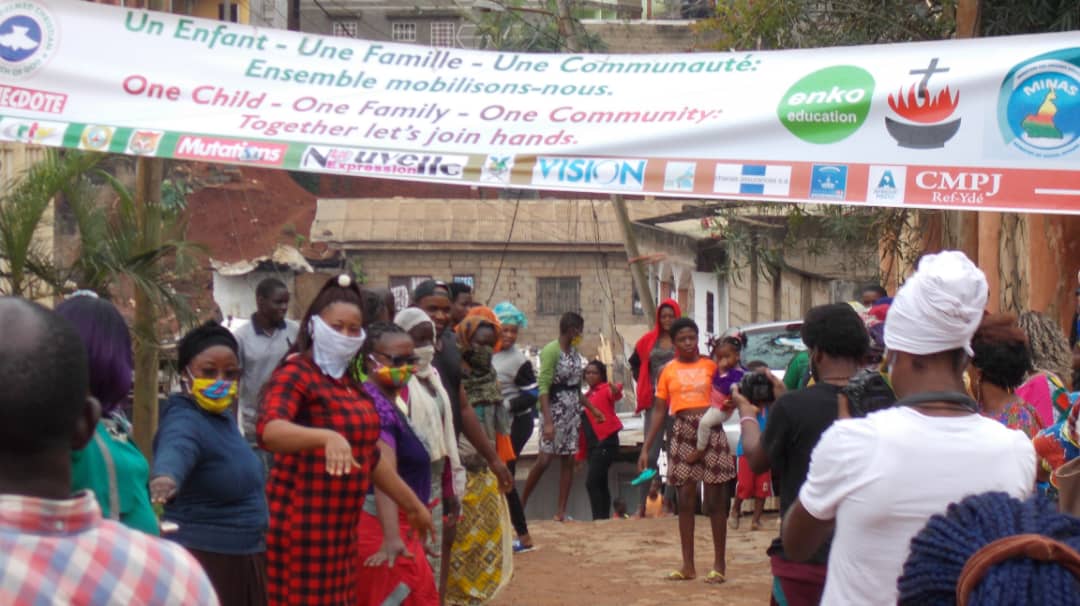 The inhabitants of big metropolitan cities of Cameroon, mainly those from the Center, Littoral, Northwest and the West regions are used to the one they affectively call « Mama Helene ». This retiree from the World Bank, who has embarked on humanitarian actions seven years ago, does not skimp on any means to come to the rescue of the most deprived people.

From support to the street children, women for the creation and maintenance of sustainable income generating activities via the distribution of basic necessities to the benefit of the most hit corona virus victims, Hélène Pieume had its work cut out of it in 2020.

This was a year of all uncertainties because of the restrictive measures taken by the Government to curb the spread of the pandemic that had caused many life losses in the world at large and in Cameroon, in particular coupled with the sociopolitical crisis in the English speaking part of the country, GivHOPE Africa, in its proven humanitarian beliefs distributed food items, soaps, clothes and sanitary material for the fight against the covid-19 to more than 1,000 households in Yaoundé, Bamenda, Ndop, Bafut and Tonga.

These actions were successful thanks to the effective involvement of the traditional rulers whose role was to identify the needy in selected areas of operation.

The consequences of the COVID-19 pandemic were also harmful on their small businesses and having learned of the situation, the team coordinated by Hélène Pieume undertook to come to their aid by providing grants for those who could pay back and loans without interest to others to boost their businesses. The amounts varied from 25,000 FCFA to 250,000 FCFA depending on the request of the person concerned, the kind of business and especially the seniority in the project and his/her moral probity. This action was not only limited to small traders but some internally displaced persons as a result of the current crisis in the English-speaking regions of the country also benefited from it. The demand is currently so great that Hélène Pieume has been called upon several times to return to these people with a view to raising the bar higher for them to become real economic agents.

It should be remembered that Hélène Pieume started this initiative in 2013 after 24 long years of service at the World Bank where she served respectively as Program Assistant between 1989-1995, Disbursement and Procurement Officer from 1995 to 1999, Information Officer from 1999 to 2007 and Strategic Communication Officer from 2007 to 2013.

This NGO has so far helped many poor and the vulnerable persons among whom street children, some of whom have gone on to become police officers, small business owners and

heavy machinery operators. One of these ex-street children got married in this May 2020, Maman Bello is his name; the IDPs, school dropouts, single nursing mothers, the elderly people, etc. The great successes of GivHOPE Africa are based on the determination of its team to sustainably reduce poverty among its targets.