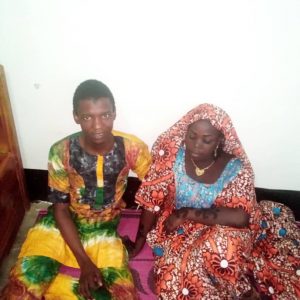 
Bello got married a week ago to a beautiful Fulfulde young girl, ending an adventure that started with GivHOPE in the Charles Atangana Park on May 4, 2019.

Last year we wrote about Bello’s life on the street and this journey has taken us more than a year to bear good fruit.

Since Bello and his family have become a full part of us, GivHOPE actively took part in the organization of his wedding that began on Wednesday April 29th with the traditional marriage at his family in-law followed on Friday May 1st with the religious ceremony consisted of breaking and sharing kola nuts between the two families with no bride neither the groom to the mosque, Saturday, May 2nd a party with friends at his home and Tuesday May 6th a reception at GivHOPE premises.

Bello is a trailer driver on the Yaoundé-Ndjamena-Bangui corridor and since lockdown due to Covid-19, he rides a motorcycle to feed his family.

Bello was our 95th recipient who returned to his hometown, his community, his family, his friends, his culture and traditions, our motto being “One child, One Family, One Community” and since then fifty eight other ex-street children have reunited with their families and communities.

This is a 26 years old young man who wanted to discover Yaoundé and ended up on the street when he was just 11. That Saturday, May 4, we were carrying out our normal routine street hunt for street children and when we reached downtown Yaoundé, our street team went to this very busy park where they found a young man sleeping on a carton. He was very ill and so weak that he could not walk on his own. Armand, GivHOPE journalist, wanted to know more about  him and how he ended up on the street of Yaoundé far away from his home town, Ngaoundéré, in the Adamawa Region of Cameroon. He said: “I came because friends told me that Yaoundé was a paradise. But I found out to my shock that street life in Yaoundé is the opposite of what I was told then he added: “My wish is to return home, please help me to go back to my family”.

After this heartbreaking conversation, we took him to the nearby pharmacy, bought drugs, water, food, cash for other needs and after contact exchange, we left. We arranged to contact his mom for her consent in a bid to the necessary arrangements for his return. His mom, Madam Rokhayatou, was overwhelmed when we called and gave her news about her son she has not heard from for years. We organized Bello’s return with other five ex-street children some months after and traveled with each of them to their respective localities. They all went back to their families with accompanied measures implemented by GivHOPE to help them settle as self-employed.

What a happy end!  We wish Zenabou and Bello all the best!

We are IRS tax-exempt Private Non-Profit Organization under IRS Code Section 501 (c) 3 –which makes your donation to GivHOPE tax-deductible.

Please visit our website at www.givhopeafrica.org and hit “Donate now” to help us to achieve our goals. Your generosity is most appreciated.