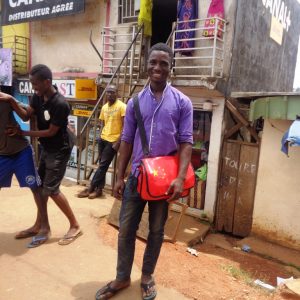 From the Street to Green Red Yellow: The Cameroonian Flag


My story, I usually don’t like to talk about it because it brings back bad memories. But I can’t help, the end of everything being better than its beginning”. This is the word of Martin Joel, an ex-street young man when he left last Tuesday to join the other candidates who successfully passed their concourse to enter the Advanced Police Training Center in Mutenguene, South West of Cameroon.

3 years ago Martin was a street child when GivHOPE met him with a group of more than 20 young boys, girls and families, including small children aged 4 to 6. We started their counseling in group and on one on one basis coupled with Bible teaching in homes and at our Multipurpose Center. In short, their rehabilitation process began with 4 programs: the mentorship, tutoring, capacity building and income generating activities programs. Later on 9 of them started small income generating activities funded by us. Today, some are self-employed and others have found jobs.

Martin chose to go back to the university under GivHOPE financing and when we found him a job, he could work and support himself and his family while pursuing his studies at the University of Yaoundé.  Last year a concourse of the Police was launched and he applied. Out of more than 3,000 candidates, Martin was admitted.  GivHOPE staff and his mother last Tuesday accompanied him to the Motto Park in route to the Advanced Police Training Center in the South West of Cameroon where he will be undergoing training for 1 year.

He said to me with tears in his eyes while catching his bus to Douala: “I met my destiny changer 3 years ago and this was the turning point of my life. You showed me friendship and gave me love I missed for the past 25 years. Your Association gave all that I was missing in my family, in my life and on the street: Abandoned and street child I am no more; Child of God I have become; financially I am independent. Meme as he called me, you did not limit yourself to only that, but today I am a civil servant, I am a policeman, I am under the green, red yellow of Cameroon Flag. What really touches my heart so deeply during these 3 years is your unconditional and unstoppable follow-up process (collectively and individually).  I wouldn’t have made it alone without your sustained and constant follow-up. YES, GivHOPE has made of me what I am today! Thank you”.

What a wonderful story! This is another success story of GivHOPE achievements in the lives of the street children and vulnerable families among many others. We are grateful to all our Champions who relentlessly accompany us day after day in this laudable adventure by giving their money, time, counsel and others. We are proud of the work we’ve so far accomplished even though much is yet to be done.