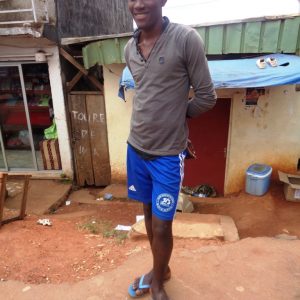 To Help 28 Neighborhoods in Yaoundé and Douala


Our first phase of sensitization and food bank in a bid to provide vulnerable persons such as elderly people, health personnel, nursing mothers and others with food items and related support materials to help them fight against the coronavirus pandemic, thereby reducing the impacts of the pandemic on them has just ended.

During the completion of this phase in Yaoundé, our team and the local media crew toured 14 neighborhoods including some in the West Region of Cameroon.

It was important for elderly people to be sensitized on the need to practice and respect government’s prescribed measures notably the wearing of masks and social distancing; thus, supporting them with some items that will help put at least a meal on their table per day because due to lockdown and food shortage, it was difficult for these vulnerable persons to afford to eat normally.

Following the adventure that kicked off last April 11, 2020, we began the tour without knowing what the outcome will be but to our big surprise, more than 1,000 households were fed within one month time frame. The packages included rice, tomatoes, sardines, salt and soaps for some while clothes and shoes for others.

Tough the balance sheet of the tour was quite satisfactory and the impact attained more than expected, the caravan witnessed some hurdles as some traditional rulers did not respect the selection criteria which targeted primarily the elderly people.

Talking during the donation ceremony, Chief Onana Eloundou said that the gifts came at a time when the world is experiencing the coronavirus pandemic with disastrous consequences. To him, “it is during such trying moments that we recognize those who are ours. Your donation comes to relief the sufferings of those who are powerless and can only say thank you.” As a result, he urged other NGOs to follow the latter’s path in such initiatives.

“God bless every leader and each member of this NGO and may your pockets be filled up. You saw the joy in each and everyone’s face because they all received their packets. May this manner of doing things be for all,” said another beneficiary.

The tour that was aimed at mitigating the impacts of the deadly coronavirus on the population and those of the third age in particular took place in the following neighborhoods within and out skirts of Yaoundé:  Nkolnyada, Cité Verte, Mokolo I, II, V and VII, Nkolso’o, Oyom-Abang, Nkolbikok I, II, Grand Messa bloc V, Elig-Effa and Ntonga in the West region of Cameroon.

It should be noted that, four neighborhoods in Douala will experience similar exercise, bringing the total neighborhoods to 28 of which more than 17,000 households will also benefit from the donation to relief them from some essential needs.

Besides that, we envisage in the second phase of this initiative, to provide income generating activities to the elderly people who are very poor but who can go into entrepreneurship to make ends meet by themselves while at the same time, visiting some orphanages for the same purpose.