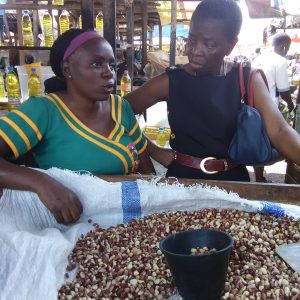 
GivHOPE rescued 2 vulnerable youths last week, one of whom is physically challenged. Starting with a small fresh groundnuts counter for her and making official documents for him, two actions that will cause them to dream again. Beatrice’s story, narrated by her big sister, Micheline, is a pathetic one that can’t leave anyone indifferent. Because Beatrice is a single mother of two children, she lives with her big sister who is also a single mom with 5.  She felt sick some years ago and bit by bit, she started losing her sight because she couldn’t afford to pay her surgery fees. Finally she became completely blind and abandoned to herself when her sister rescued her. We were on stage at a radio program when she got in contact with us. Her story was so heartbroken that we could not help consoling her by giving her the means to become self employed. She now has a counter where she can sell all kinds of foodstuff to support herself and her two kids. Beatrice has become a full part of us.

As for Mamadou Ibrahim, he is a street young man we found during our daily hunt on the street. He had no official documents that could identify him. After individual discussions and counseling sessions, we offered to help him to get his ID card and all related documents from the First Instance Court of Yaoundé. We went through all the processes with him and ended up to the Commissariat in charge of establishing new ID card. This action is part of our duties: helping those who do not have official papers such as birth certificates and ID cards to have them through the normal channels set forth by the Government.

Breathing life into the future of these two underprivileged youths with a simple action, together we can make a huge difference! Come join us in this noble cause so that together we give them hope. If you don’t help care for them, who will?